Donnie is no stranger to the Mustang scene, whether he's on Facebook creating ruckus and calling people out, you can find him at some of the biggest Mustang shows in the country. 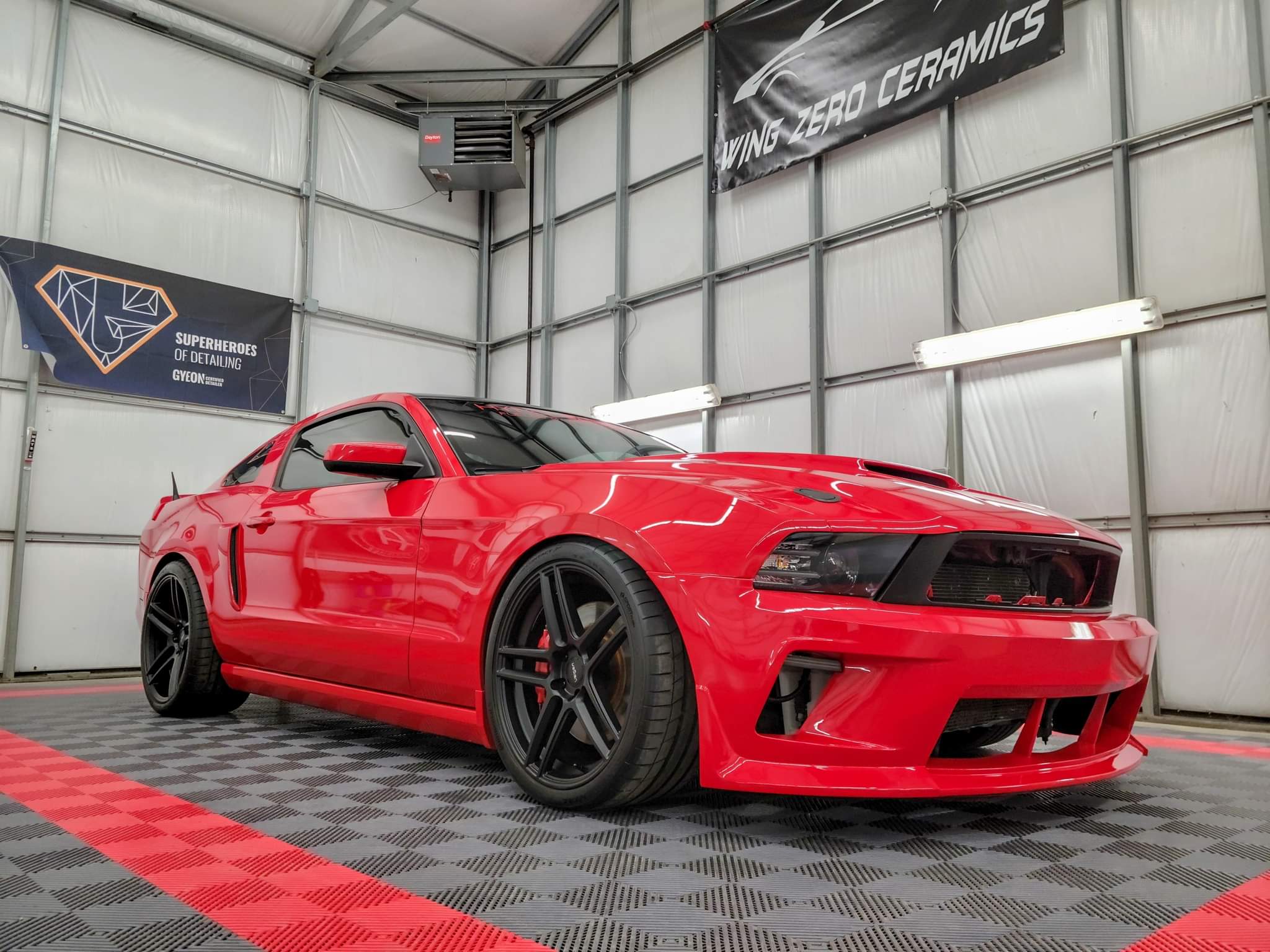 At first glance you would never be able to tell, but Donnie's Sick Race Red S197 has a whopping 226,000 miles, YES, this thing has over 200k miles!  So, this dude has taken tremendous care of this S197 and with that, we all thank you!

A little bit of information on this sexy beast: 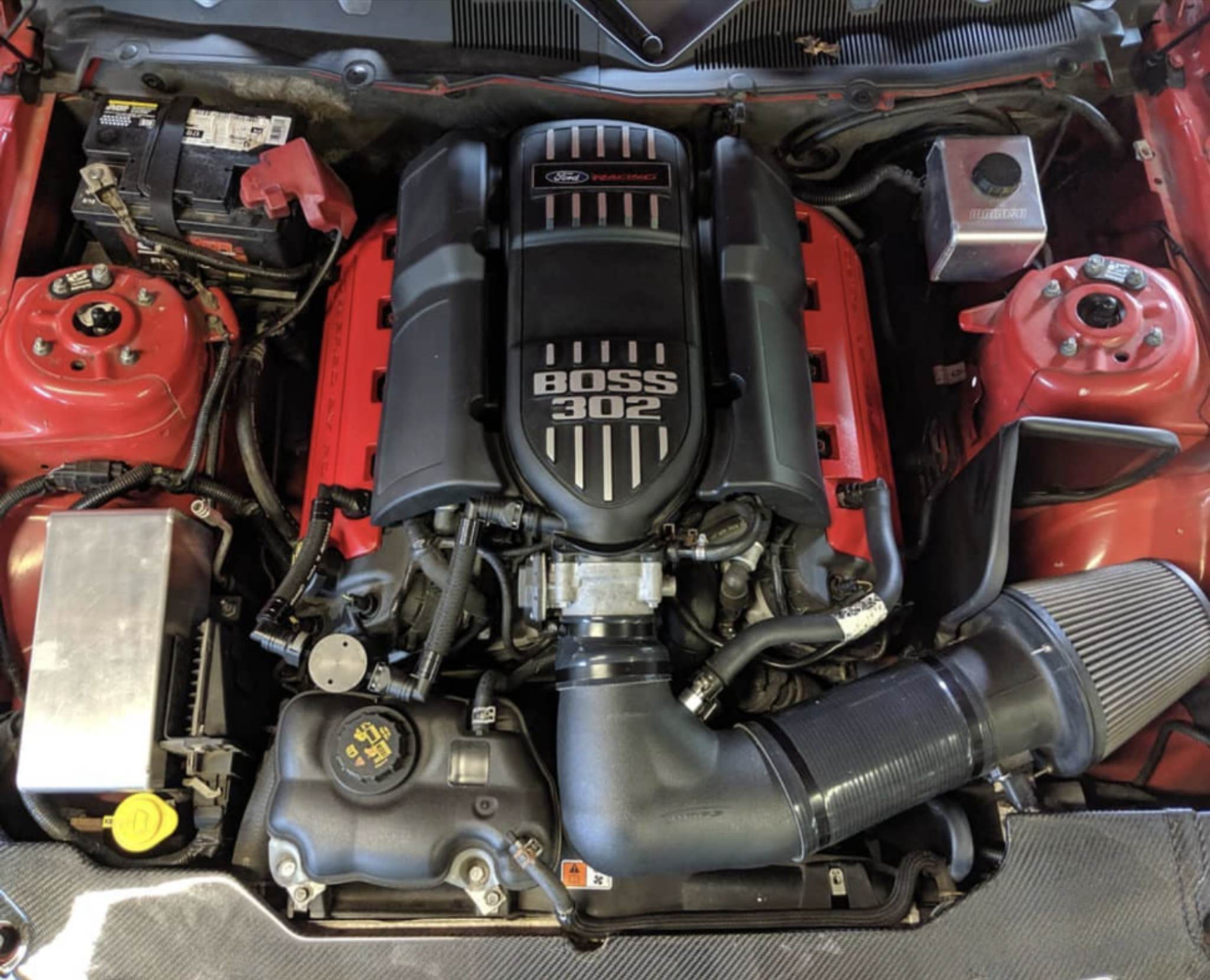 Interior mods are Corbeau LG1 racing seats, harness bar and harnesses. It has a rear seat delete from a brand he claims he "cannot remember", with a custom flag upholstery on it. Gauge cluster from a 13-14 track pack with steering wheel buttons. He has a Navos OE style nav radio to go in but like every Mustang owner, he hasn't installed that just yet. Console and radio bezel has been wrapped in a brushed silver color. 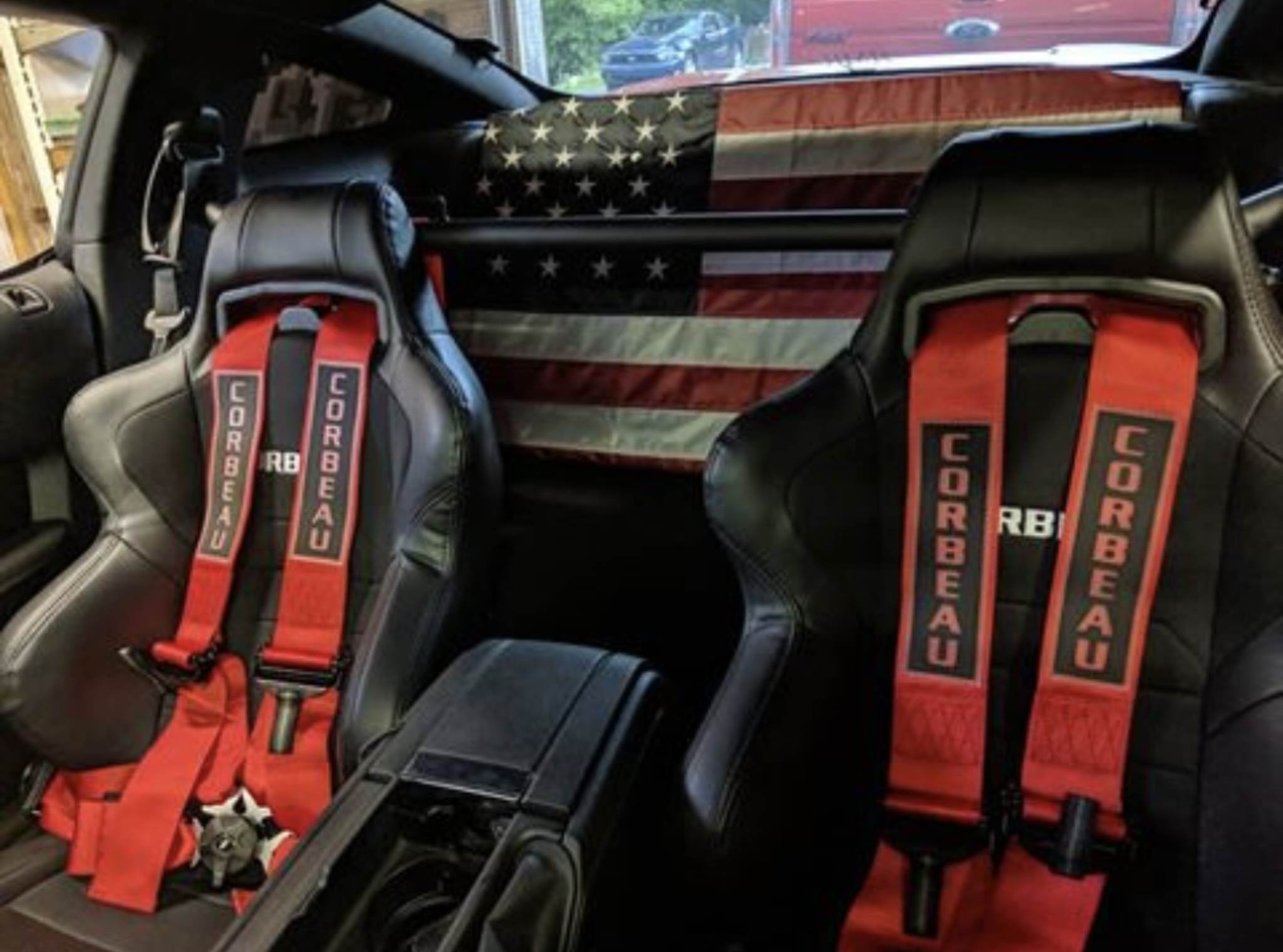 Exterior has a Street Scene front bumper, Cervini's Stalker 2 hood, V6 front fenders for the no badge look, 13-14 rear bumper and taillights with GT500 valance and custom quad tips. It has a Roush rear wing, and a satin black roof wrap. Sitting on Velgen Split5's in satin black 9/10.5 with 275 front and 305 rear Continental ExtremeContact Sports 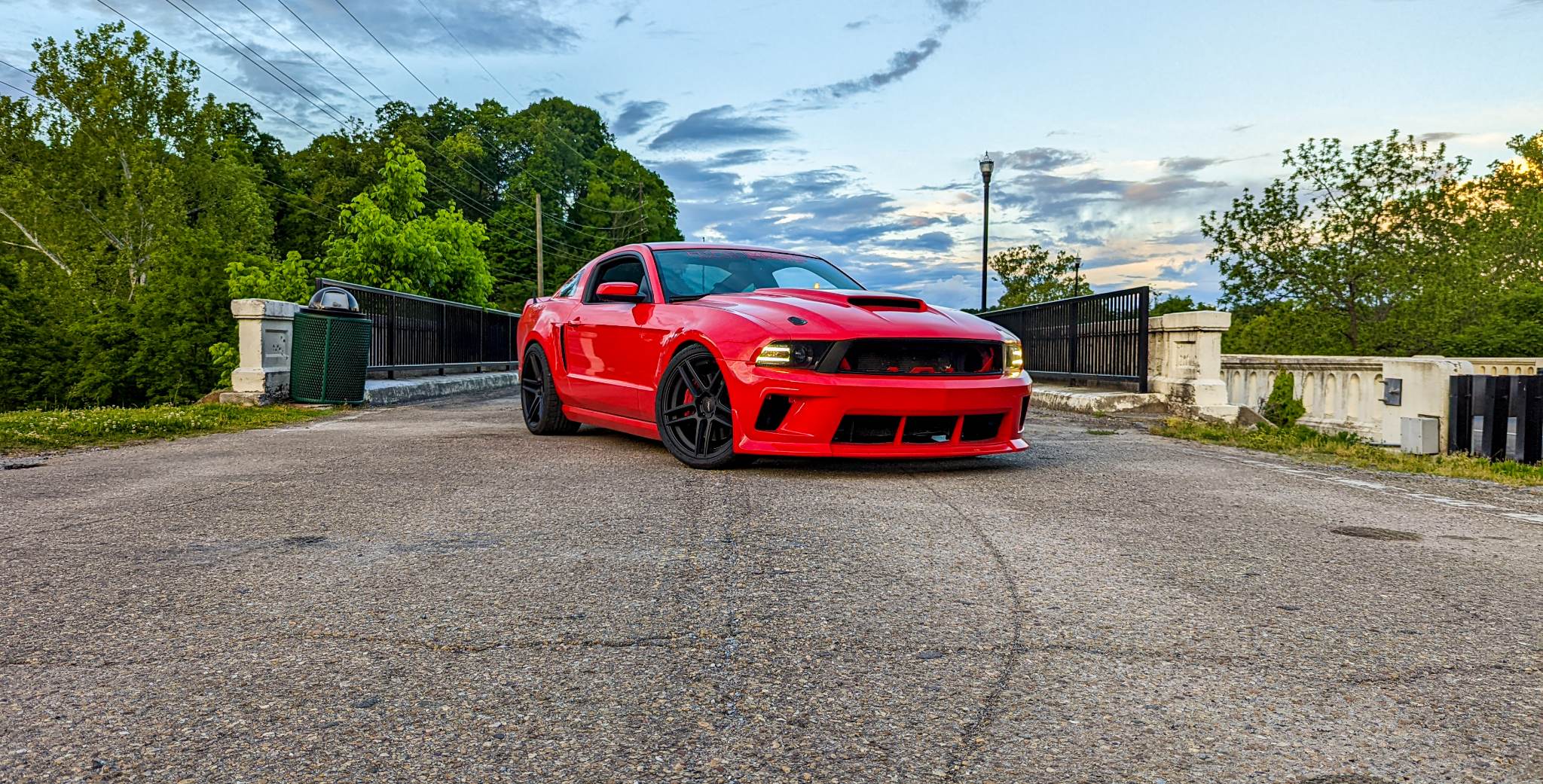 Donnies plans for the future: "I'd like to do the GT500 divorced clutch reservoir, and the GT500 rear brakes, with either GT500 front 6 pot calipers or S550 performance pack calipers. Plan to upgrade from the factory 3.15 rear diff gears to 3.73s and a torsen. Planning on going with Ben Calimer for the trans build, with a better clutch. Plan to do a 4 point roll bar. Want to do a ported CJ with a monoblade throttle body, PMAS and comp stage 3 cams, as well as some ARH 1⅞ longtubes and x pipe." 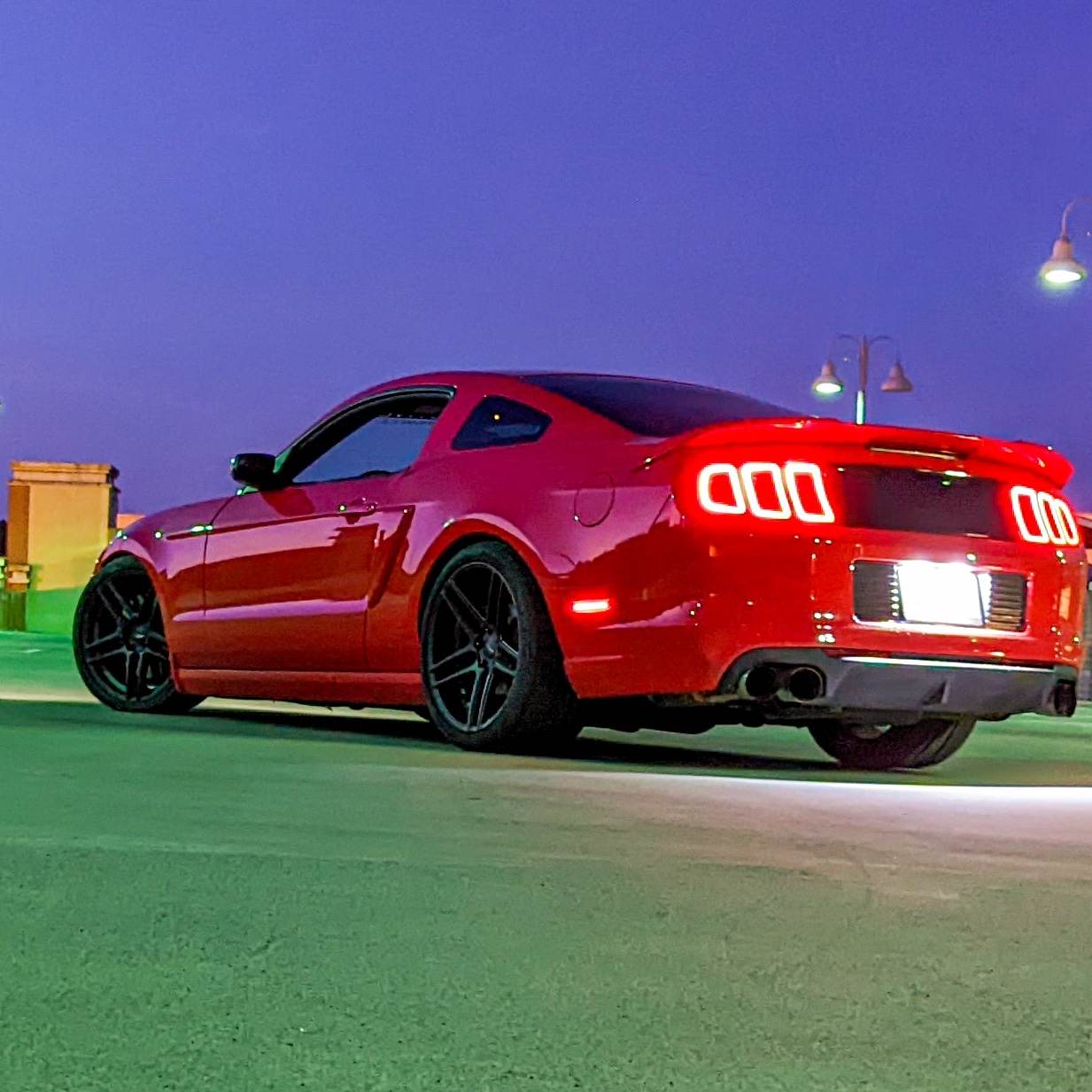 Lastly the car has been fully paint corrected and ceramic coated as well.

With that said, I dont think Donnie ever plans to get rid of this pride and joy of his.  The memories made and the personal connection I can only imagine the next time we write about his car there might be 500k miles!!

A little about Donnie though and I'll leave in quotations as I found it comical he had a hard time talking about himself!

"Uh, I'm 31, born and raised in the mountains of east Tennessee. I grew up in Mustangs so that explains the love I have for them. Despite red being the best color for a Mustang, it actually isn't even my favorite color. That's purple. I've done 95% of the work on my car. The only reason it's not 100% is because I lack the tools to paint, and one control arm bushing decided it didn't want to leave the car. Some of my other hobbies, aside from the cars, are guns and shooting, building models, and streaming on YouTube. As far as life goals? I'd like to actually get deep into the automotive industry. Whether that's building badass cars or whatever."

So with that said, I'm still surprised he said purple was his favorite color!

But the most important part, his car... enjoy!